Fish – Your Cat’s Favorite Food Can Actually Be Incredibly Harmful 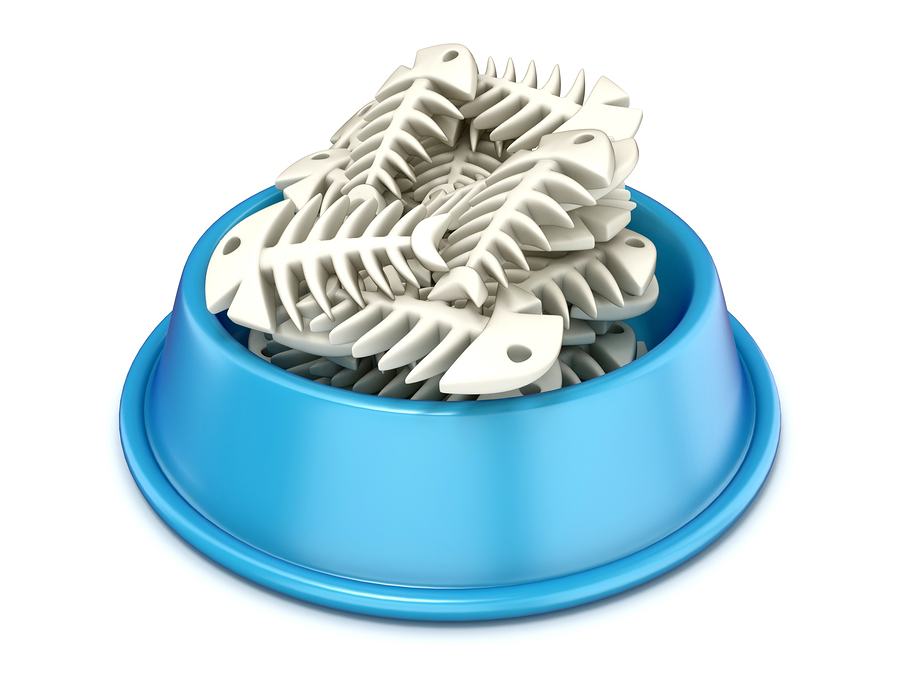 If I were to mention “cats” and “fish” together, you probably think of two things.

Even though cats are carnivores, they should rarely, if ever, consume fish. Although many cats have grown to love fish, it is not a natural feline food. It is not nutritionally appropriate, and it is a part of a cat’s natural diet. Besides the rare species, they do not eat fish in the wild. To put it bluntly, high doses of fish are not safe to feed cats. Why does a consistent diet of fish become dangerous for a cat?

Some fish contain thiaminase, which destroys thiamine. A thiamine deficiency results in severe neurological symptoms such as seizures, stupor, head tilt, ataxia, and coma. When left untreated, these can all be fatal. When a cat is on a species appropriate diet of fatty proteins, like those found in animal tissues, thiamine is aplenty. Although Atlantic salmon, trout, cod, and flounder do not contain thiaminase, whitefish, goldfish, catfish, bass, smelt, mackerel, herring and yep, you guess it – tuna – contain high levels of thiaminase. Studies have shown that when a cat was fed a thiaminase-based seafood diet on a daily basis, symptoms of thiamine deficiency appeared in a mere 23 days. It is also worth nothing that canned tuna meat meant for human consumption does not have added thiamine. If your cat has a small tuna treat every once in a while, they should be fine. However, if it makes up a large part of their diet, you are putting them at risk for thiamine deficiency.

Studies have also shown that when fed canned salmon or tuna, cats developed a Vitamin K deficiency. Symptoms of a Vitamin K deficiency include prolonged blood-clotting time and hemorrhage. Fish-based commercial products stop Vitamin K synthesis in cats. Your cat’s food company has figured this out, so they add a synthetic Vitamin K supplement called Menadione. Easy enough right? There’s no way that could be harmful. Think again. Menadione is toxic and has been proved to damage kidneys, lungs, liver, and mucous membranes. However, it is required to be used in any pet food containing at least 25% fish matter.

In case the above wasn’t enough to convince you, allow me to divulge even further. Fish also contains iodine. Our cats aren’t meant to process large amounts of iodine; doing so can lead to hyperthyroidism. Additionally, long-term ingestion of fatty, oily fish such as tuna can deplete a cat’s Vitamin E levels. A Vitamin E deficiency can cause a very painful condition called steatitis, which can be life-threatening if left untreated.

Most fish used in pet food is a combination of leftover remnants, high in phosphorous and magnesium. This can pose a problem to cats with a history of urinary tract disorders or kidney disease. Eating fish can cause a cat to develop a painful urinary tract infection, potentially leading to emergency surgery.

The fish you may tend to feed your cat – tuna, salmon, ocean whitefish, king mackerel, shark, and swordfish – may potentially contain extremely elevated levels of mercury in addition to other chemicals, which can also lead to hyperthyroidism. Hyperthyroidism in cats has reached epidemic levels. The fish that you would be feeding your cat are at the top of the “fish food chain,” meaning they are consuming smaller fish. However, this results in poisoning, as the top-feeders are consuming toxins and pollutants worldwide. Why risk poisoning the cat you so dearly love and care about?

The same concept applies to fish as it does with meats. Consuming bones may cause gastrointestinal tract issues for your cat. Even though a cat may have eaten fish bones before with no problem, it only takes one fish bone becoming lodged to send you on a trip to an emergency veterinary hospital. With fish especially, there are smaller bones that we might not be able to see and are difficult to remove.

Allergies are the immune system’s reaction to toxins. Simply put, if you remove the toxins, you will remove the allergy. Fish is one of the top three most common feline food allergens, along with beef and dairy products. A study of identifiable cat food allergies showed that fish was a responsible ingredient nearly 23% of the time. Much like beef and dairy, fish are not really authentic or natural parts of an adult cat’s diets and should not be considered as such.

Cat food allergies are minimized when a cat’s diet is rotated. There is a belief that over-consumption of any one food may lead to an allergy of that particular food. So while a treat is ok every once in a blue moon, consistency is your worst enemy in this case.

Focus on Natural Products That are More Beneficial To Your Cat

Even though your cat may love fish, it is not a natural food source for them. As easily as your cat has become addicted to fish, it can become addicted to chicken or other feline-friendly foods when fed that food exclusively. However, this may be a tough habit to break. Cats addicted to fish will state hunger strikes by refusing food in favor of fish. Do not allow this to happen! Fish can be used as a rare treat in moderation, amounting to no more than 10% of your cat’s total food intake.