How To Manage Having A Cat And A Dog 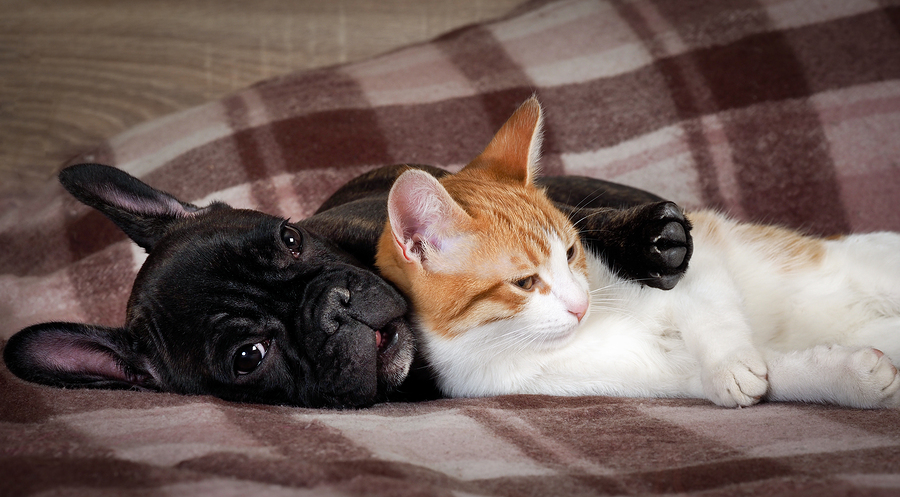 Animal lovers frequently open their homes to multiple types of animals. We have all seen some bad situations where cats and dogs are in the same vicinity, it can get aggressive. Luckily, we have also seen some beautiful friendships between a cat and a dog develop and they are the best. There are a few main factors to consider when integrating a cat and dog together. The first interactions are extremely important in how the relationship will develop. General concerns surrounding aggression, how and where they eat and territory in this house will need to be addressed from the get go.

When introducing a new cat or dog into the house where another animal already live there is a sense of entitlement and protection the original pet has. They are trying to protect their space and family, so our job is getting them to feel as though the new animal is a part of that. If the cat and dog have a poor experience with one another the first time or are forced on each other it can lead to a continually tumultuous relationship.

The smartest way to go about this is a slow desensitization of both the animals. Instead of just forcing and putting them in the same space immediately, it is a good idea to start with just some vision and awareness of the other animal. Consider putting a gate in between two rooms that allows each to have some area of the house but also be spatially aware that there is another animal present. In each space there should be the needed items for that animal, litter box with the cat and so on. Give this some time and make sure they are aware of one another but comfortable in their space, to ease them into the house.

After they have spent some time in their own space you can do some practice runs of putting them in the same space. Start this by removing the gate from where the cat’s space is but do this while the dog is distracted by something, like a toy. For a short time have the cat in the same room and then return it to its space. If you feel it necessary you can keep the dog on a leash but be sure to reward the dog for staying focused on something else while the cat is present. This is the start of the animals becoming comfortable with each other, do it a few times a day.

Presenting the cat in the same space as the dog should happen continuously until you feel that the dog is able to ignore the cat whenever they come in the room. Then you can make the visits for longer periods of time until you feel secure leaving them be in the same space. The initial contact between the animals is very important and is safest done through slow sessions of comfortability with one another.

Once you have introduced the animals to each other and feel comfortable with them in the same space there are some issues with how you let them co-exist that should be addressed. Most importantly if you do feel like they are not getting along, at any time it is appropriate to separate them into their spaces again. Dogs, on average, are a lot bigger and stronger than cats. In an effort to protect the safety of both of the animals we must monitor the aggressions, dogs can kill cats very quick and easily. Some small tips about how to set up the home that could make it easier for the animals to exist in the same space.

There should always be a place for either animal to go to feel like they can be separated from the other. Have the litter box, cat food and water in its own space away from the dog bed and food. Each animal still needs to have confidence in you that you respect it enough to provide it with its own space. It is a dream that your dog and cat become friends but that is a rare result. The main goal here is to get them to tolerate each other respectfully and maintaining separate spaces helps insure they can feel safe away from each other when needed.

If you find that the animals are having issues it is always a good idea to have them be completely separated when you are not around to supervise them. Have the dog stay outside and cat inside or have a crate for the dog to spend time in while you are away. This will eliminate the opportunity for a fight that could turn very bad without supervision. Even if you have animals that get along well when you are around it is a good idea to separate when you are gone, just to be sure.

Positive reinforcement is very effective during this time. Praise and reward the animals when they are able to respect each other’s space and leave each other alone. I know you have seen some adorable pictures of cats and dogs cuddling. As cute as they are that is not realistic and you should still feel good about your animals just being able to peacefully live together. They should feel good about it as well and should be rewarded.

It’s an exciting time bringing a new family member home. Use these techniques of acclimations and separation to allow the animals to ease into becoming acquainted with one another. Animals don’t always get along but if you can facilitate a safe space for them to get to know one another there is a much higher chance of them becoming one of those adorable pictures.