The 5 Best Ways To Exercise Your Cat 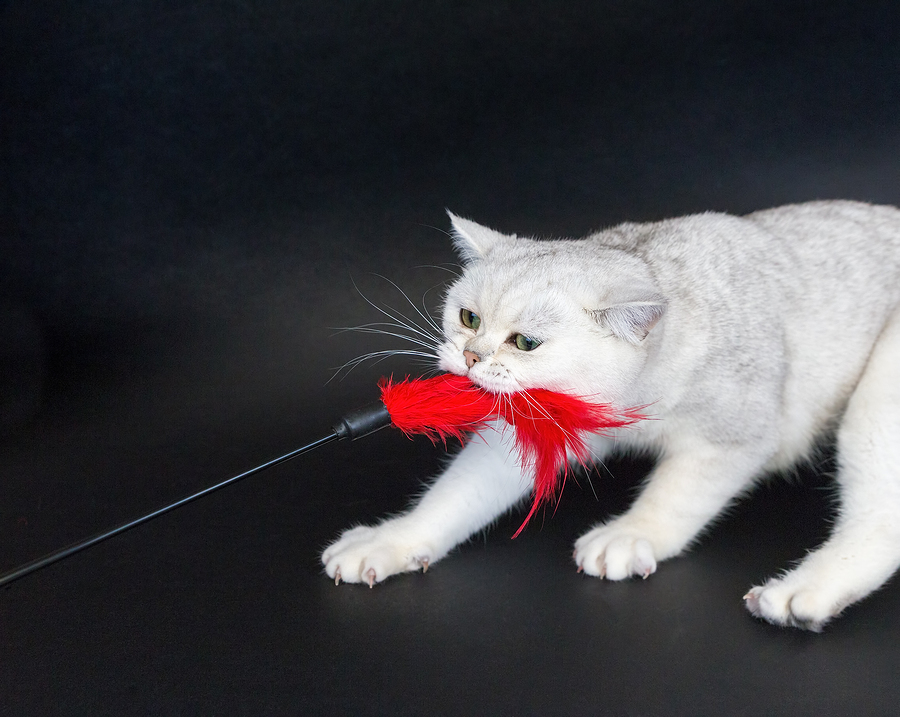 Cats are more like us than you think. Along with a proper, high quality diet they need to stay active and exercise their bodies to stay in good health. Just letting them outside or playing with them every once in awhile may not be enough. If you are concerned that your cat is overweight but the dietary issues have been addressed then there are some other ways to get your cat fit. Maybe you have a goal of getting fit as well and you can do it together!

Cats love to play and love a challenge, your curtains can probably vouch for that. There are some awesome games you can easily put together that will get your cat running around under the guise of a challenge they must complete. For example, putting a bouncy ball in a large cardboard box or even the bath (just something with walls) is a great way to get your cat running all over the place. They will be in a trance trying to stop that ball from bouncing all over the walls.

Mazes are fun to with cats and you could probably turn it into a proper video that people would enjoy as well. Sending a cat through a maze you created out sounds like a fun family project and a solid challenge for your cat to get some exercise through.

A classic cat trick that has always deemed itself a funny prank, is actually a great way to get that ct moving. They can’t resist themselves and you are in control of how much movement they are taking. Plus you can do this fun activity while you sit and watch television. It’s also hilarious and even the most loyal of “dog people” will enjoy the entertainment value of this game. Some tips for keeping this laser show available is to eventually replace it with a toy they can catch so that you cat doesn’t get so frustrated with catching the beam of light that they never want to try again.

Not just for cats to pretend they live in a fancy high-rise the cat tower is actually a great way to get your cat a workout without much effort at all. They have to pull themselves up and jump all over just to get into the thing. Many come with toy attachments as well which will keep them playing and moving around once up on the tower. Indoor cats especially need some obstacles added in the house just to keep them sharp and in shape while still staying in the house.

Yes, a wheel just like a hamster. Many people don’t think to or don’t want to put their cat on a leash and walk them around like a dog. Fair enough, it does look kind of weird. If you do not have the ability to let our cat outside and they need to be supervised there are exercise wheel made just for cats. They easily fit wherever your other cat area equipment goes and allow the cat to have the choice of exercising hen it wants to. Maybe that is an issue for you? You have the setup you just struggle getting the cat to actually use it. Fair enough. We recommend using treats or catnip to get the cat to use the wheel. It may be difficult the first couple of times but they will associate the two soon enough. Some cats really enjoy themselves on the wheel and don’t need any bribing.

The plausibility is up to you and your cats attitude but adding another cat to the mix is a sure thing if you want to add more activity to your cat’s life. They will play, run and wrestle all over the house. Even older cats will become youthful and energized again If another cat is added. This does not necessarily mean you have to get another cat yourself, although that is the safest and easiest way, as they will have the time and space to get to know each other in a healthy way as cat exercise partners.

If your cat is socialized and it has proven positive then letting them play with a neighbors cat or a friend’s cat is a possibility as well. It can be difficult at first for them to get to know each other as cats are very territorial but the exercise they get from playing with another cat is second to none. Again, the distraction of the challenge and the general competition will distract them from anything they thought they rather be doing.

All in all, the best ways to exercise your cat are to just play with them. Toys, lasers and other cats stir up such a competitive and challenge oriented gene in a cat they will just see the exercise as something fun. Which is really the key to being in shape for humans and animals, make it fun. If the opportunities to play with your cat have become few and far between, then adding some equipment they can use themselves is the next best things. Cats are fine with time to themselves anyway, giving them something to do in their time that will help keep them healthy is perfect. If you are out of the house and they still have the setup to exercise without you, they will do it. Bribery always works too, just make sure they are working off whatever you bribe them with.